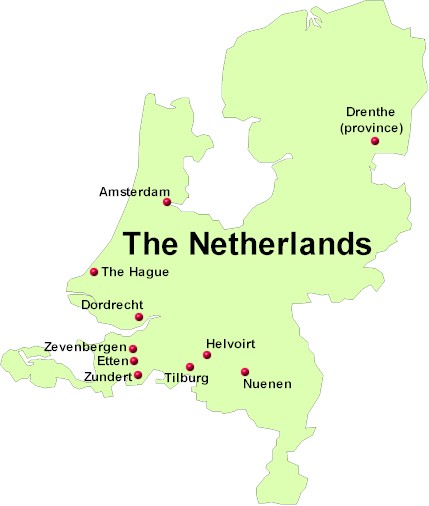 Tilburg is known for its ten-day-long funfair, held in July each year. The Monday during the funfair is called “Roze Maandag” (Pink Monday), and is primarily LGBT-oriented.

There are three railway stations within the municipality: Tilburg, Tilburg Universiteit and Tilburg Reeshof. The 75-hectare (185-acre) “Spoorzone” area around Tilburg Central station, once a Dutch Railways train maintenance yard, has been purchased by the city and is being transformed into an urban zone.

Tilburg experiences an oceanic climate (Köppen climate classification Cfb) similar to almost all of the Netherlands. The most notable fact about Western Brabant is that there are more thunderstorms than anywhere else in the Netherlands, up to 31 days a year.

The economy was concentrated on wool industry for centuries, however, since the 1960s, Tilburg has made more progress in having different kinds of industries, supported by the government to save the city from poverty after the decline of wool industry. Chemical company IFF has a factory in Tilburg. In the 1980s, the Japanese company Fujifilm came to Tilburg. Insurance companies like Interpolis and CZ are headquartered in Tilburg, as well. Iris Ohyama has its European offices in Tilburg.

Tilburg has a high concentration of transportation/distribution industries, specializing in value added logistics and services, due to being the geographical center of the Benelux countries and being located on the transport corridor between Antwerp / Rotterdam and the Ruhr area. The ‘Waalwijk-Tilburg’ region has been in the logistics hotspots top 3 within the Netherlands for years now and finished 3rd in 2017.

Tilburg has three railway stations: Tilburg (Centraal), Tilburg Universiteit and Tilburg Reeshof. The latter was built to connect the then-latest district of Tilburg, the Reeshof. Intercity trains only stop at Tilburg (centraal). The name of Tilburg Universiteit Station was Tilburg West from its construction in 1968 to December 2010, however, after 40 years, it was not the westernmost station anymore. A fourth railway station is planned for Berkel-Enschot, also in the municipality of Tilburg and getting more absorbed into Tilburg. In the past, until 1938, Berkel-Enschot had its own train station. Udenhout, lying further northeast in the municipality, also had its train station until 1938. Both stations are on the line to ‘s-Hertogenbosch.

The Tilburg city and local buses are operated by Veolia Transport Nederland. The city experimented from 2005 to 2008 with free public transport for children and 55+ people. Before Veolia took over the bus network, it was operated by BBA (abbreviation for Brabants(ch)e Buurtspoorwegen en Autobussen). It has since been transferred to Arriva.

Tilburg has an extensive bicycle path network called Sternet-Routes. The first bicycle path of this network was built between the city center and the university in 1975. From the mid-1990s, multiple bicycle paths (rather than lanes along the road) have been built. Since most of these have been paved by tiles, there is an increasing call for asphalt-paved paths. For this network of bicycle paths, some new tunnels were built under the railway that crosses the city.

Tilburg is, at variance from other Dutch cities of a similar size, connected by only one national motorway, the A58 / E312 (to Breda and Eindhoven). An outer beltway, consisting of two provincial 2×2-roads and the A58, was finished in May 2012. Although the outer beltway is fully navigable, the Burgemeester Bechtweg, which was built initially as a two-lane (one per direction) road, was finished in 2013. Two other routes are of considerable importance for Tilburg: the A261/N261 to Waalwijk and the A65/N65 to ‘s-Hertogenbosch. Neither is a complete motorway, and both experience bottlenecks. Various plans exist to build both to higher standards, with the N261 improved in 2015.